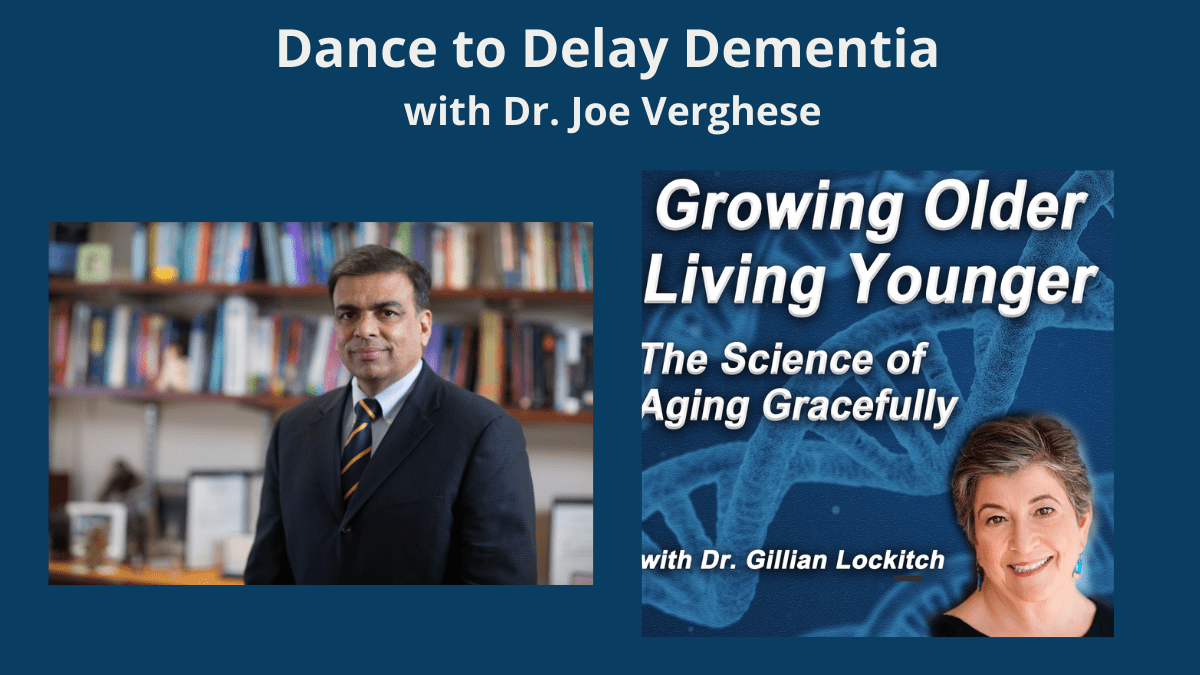 Agnes de Mille, American dancer and choreographer expresses the power of dance: “To dance is to be out of yourself. Larger, more beautiful, more powerful. This is power, it is glory on earth and it is yours for the taking.”

Does dance also have the power to  ward off dementia?  Today’s guest is Dr. Joe Verghese, Professor of Neurology at the Albert Einstein College of Medicine in New York. His research centers around the effects of aging  and disease on gait and cognition in older adults, and whether cognitively stimulating activities such as dance, can reduce the risk of losing mobility, falling, developing dementia and general poor health.
In an  early study of the association of Leisure Activities and the Risk of Dementia in the Elderly, 3 of 6 cognitive activities included (reading, playing board games and playing musical instruments) were associated with a lower risk for dementia, but of the 9 listed physical activities, only dancing was associated with a lowered risk.
We touch on current studies of physicality and cognitive training for those at risk for Alzheimer’s. One recent  pilot study into the impact of regular social dancing as an intervention in older adults at high risk for Alzheimer’s disease had to be cut short during the pandemic with only half the expected participants completing the study. Another recent study is investigating  whether computerized cognitive training could enhance mobility in older adults.  There remains some controversy about cognitive training. It is clear that there is a ‘near transfer‘ effect, improvement on testing because you’re training on that same process on which you’re testing them. And  consistently, almost every study shows that there is a near transfer effect. The challenge is whether that translates into improvement of executive function for real life skills, ie, a ‘far transfer effect.’

For those of us looking to age youthfully, keeping active both physically and mentally, Dr Verghese suggests: “Pick  a few leisure activities that you enjoy and then engage in them at least  five days a week, but every day, if you can. It’s good if you do it as part of a group, because then there’s a group dynamic; when  you get together in a group, there’s peer support that you get. And also increasingly we are recognizing that socialization itself might have cognitive benefits. So people who socialize more tend to have better cognitive function. and seem to be at less risk of cognitive decline”

To learn how you can decelerate your aging trajectory,  stay vibrant and vigorous, or start your own online business in wellness and anti-aging, email me at podcast@askdrgill.com  or book a call with me at  https://calendly.com/askdrgill/30min

To order your copy of Growing Older Living Younger, the Science of Aging Gracefully and the Art of Retiring Comfortably at a special price at http://www.gillianlockitch.com